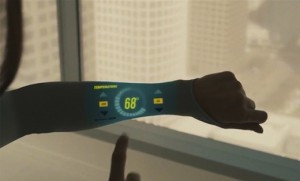 There will come a point in the near future when these five forces — mobile, social media, data, sensors (internet of things) and location, as Robert Scoble and Shel Israel call them in their book “Age of Context” will transform student affairs. As with every technology, the applications of these technologies have negative and positive consequences. Privacy is certainly at the forefront of concerns. For example, this article is about a proposed legislation related to cell-phone tracking in retail stores. Consider these probable scenarios:

– A student walks into a building, let’s say career services, and they are presented with information based on their location. This information could be could be done using a combination of wireless sensors like iBeacon by Apple and a student’s mobile device. This is a concept called geo-fencing. To further extend this idea, more personalized information could be relayed to the student’s mobile device based on an a personally identifiable information (PII) emitted by their mobile device or identification card they carry with them. The transmission and availability of these PII would have been granted by student.

– A student living on campus is feeling ill so he/she goes to the student health center. This student, a self-quantifier, has a gadget on his wrist, something like a more advanced Fitbit that monitors and records his/her activities and body functions, including heartbeat, blood pressure, etc. These info are stored on the cloud. With the student’s permission, the physician accesses the student’s records, along with electronic records from the student’s physician(s) to diagnose the cause of illness and to determine further actions.

– An online student logs on to a website. The system automatically retrieves information about this student from university and third-party systems, including academic, personal, mental and physical health,  financial, and extra-curricular activities. It does a complex analysis of these related data and provides a holistic picture of this student. Based on patterns observed with other students with the same profile, the system presents personalized information to the student, which could include suggested actions to take. In addition, the system could also alert an advisor which prompts the student for a virtual advising session.

How likely are these scenarios above going to happen? I can’t predict the future, but I think given where technology is today, I have a sense, these scenarios could happen sooner than later.

What are your thoughts on the possible scenarios above? Do you think they’re conceivable? What are the issues involved?