I attended the Western Regional Career in Student Affairs Day at UCLA this last Saturday, Oct 17, with the UCSB’s NASPA Undergraduate Fellowship Program (NUFP) team. This was an opportunity for our undergraduate students to learn more about student affairs as a profession and to meet other students and professionals in the field. I also attended to be a panelist for a session on Social Media in Student Affairs. As it was with the previous years I have attended, I left the conference with a sense of renewal and commitment to my role as a student affairs professional. The event was well planned, the sessions were informative and the speakers were all knowledgeable. I sensed those involved in the planning and those who participated a deep commitment to serving students and to learning about student affairs. Beyond the learning was also the fun moments getting re-acquainted with friends and colleagues I interact with through social media as well as meeting new friends. Here are some of the personal highlights (I can remember) of the conference:

Dr. Sumun (Sumi) Pendakur‘s keynote speech (“The Personal, The Political, and The Professional”). Dr. Pendakur delivered a dynamic speech about the intersections of her personal upbringing and her profession. As she said, “we all come from somewhere” and so she spent some time introducing her parents, specifically her dad, and how their experiences informed and shaped her world views and her activism. She shared her personal story because as she said, “personal narrative informs our work we do.”  She spoke about our obligations as student affairs professionals in serving all students and to promote success for all students, not just for some. She asked the question “are they graduating and thriving or are they surviving”? Dr. Pendakur also shared some strategies to get the most out of this conference and they are applicable to our daily work as well. For one, she suggests doing some relationship building – purposeful networking. In addition, she suggested self care/renewal. Conferences this size can be a challenge for introverts (like me) and it’s okay to find a corner some place alone to re-energize ourselves on our own. Lastly, she suggested pushing the edge / practice taking risks. Ask questions and challenge. We need to practice asking questions and we don’t have to be SSAOs to be asking questions. We can ask questions wherever we sit in the institution. 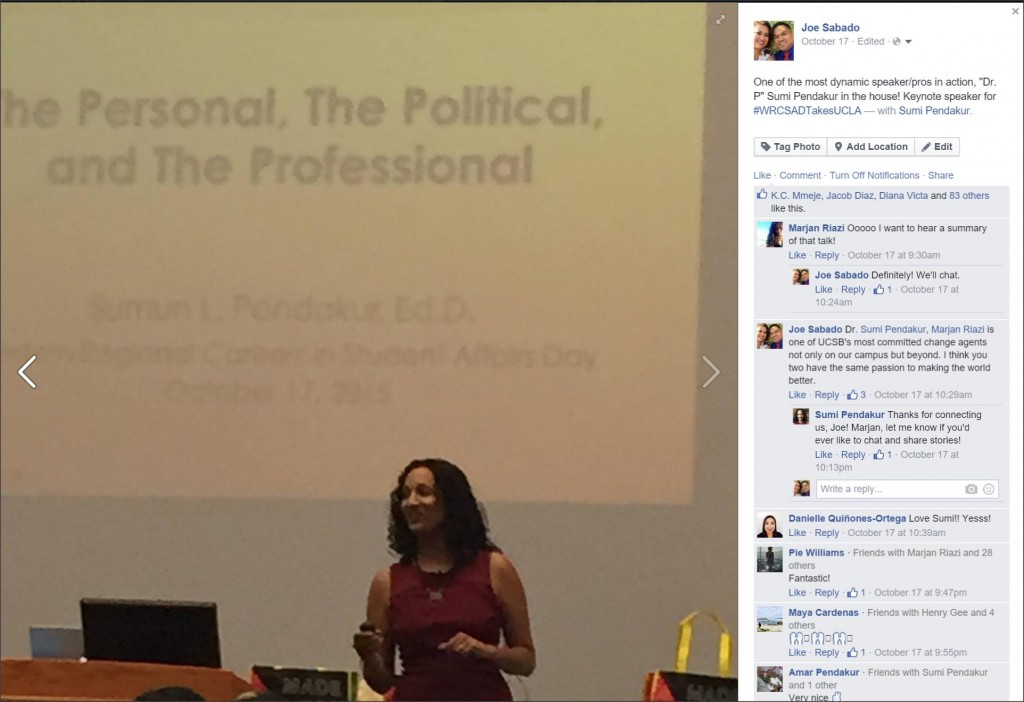 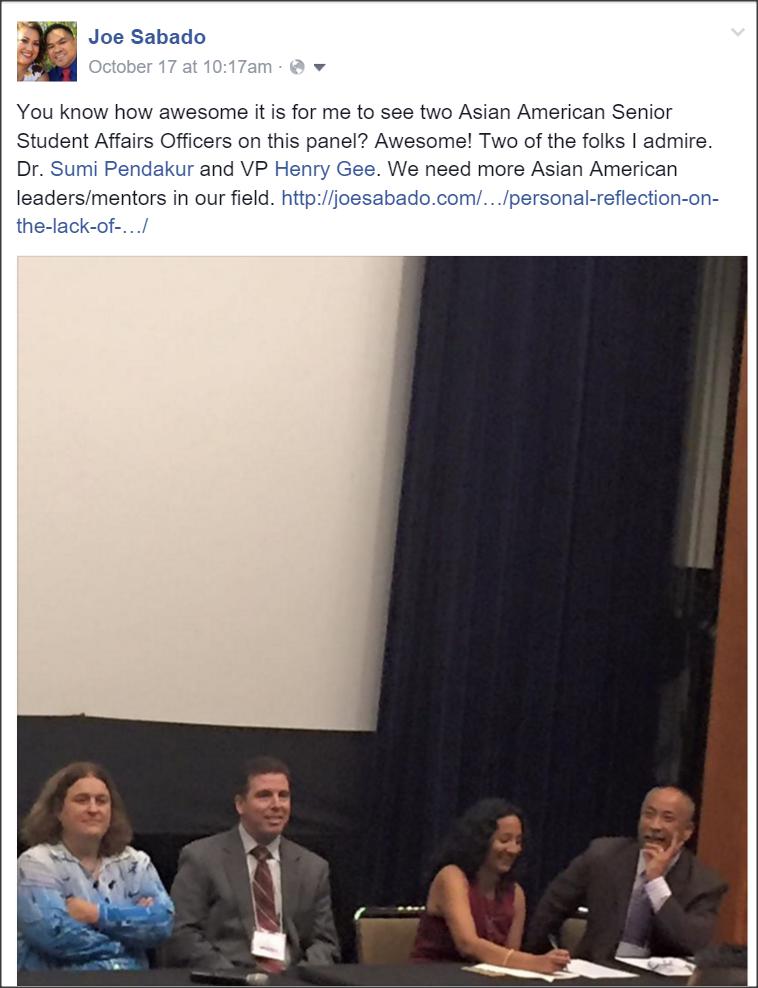 This session really made me think of where I am in my career and where I would like to go in my career. It was during this session when I had this “Eureka” moment of what my purpose in student affairs has been though I never realized what it was. This was to shape my institution and higher ed in general to best serve the interest of students!

The other important insight I got from this session was the idea that I don’t want to be pigeonholed as an “IT guy” because I’ve primarily been in student affairs IT for most of my career. I have always seen myself as student affairs professional who works primarily with technologies to promote student success and also one who has played several roles as an organizational advisor, mentor, FYE discussion leader, multicultural programming facilitators, etc. The challenge and interest for me has been on how to bridge the gap between IT and student affairs and in general, how to use technology more effectively within the context of student affairs. It is still my goal to be in a senior administrator someday to be able to solve the challenge I posed through a position of Dean of Student Affairs Technology, a role that does not yet exist. This role needs to be at the highest level in student affairs organizations sitting along side other senior student affairs officers (SSAO) table. As this role still does not exist, I continue to advocate that an IT director or one who is in charge of enterprise technology initiatives within student affairs need to be at the SSAO table.

Black Lives Matter in the Ivory Tower: Trials and Triumph in Navigating Anti-Racist Work session. This was a session that had been planned to be facilitated by a UCLA senior student affairs official along with a panel, but due to the on-going investigation of the “Kanye Western” theme party which involved racial overtones, Dr. Dougherty, the facilitator was not able to attend. Apparently, the other panelists from other universities were able to attend as well. Two professionals, Diana Victa from Cal State Los Angeles, and Patricia Nguyen from UCLA (and UCSB alum) effectively facilitated the hard topics of how to promote anti-racism efforts on campus and the barriers facing these efforts. Participants spent time sharing their thoughts about anti-racism challenges and opportunities at their own campuses. Undergraduate students spoke about the challenges of being expected and devoting time towards fighting for social justice while already facing heavy academic work. Some professionals spoke about their personal challenges and how they found their voices in the process. When asked why we attended the session, I shared that I wanted to learn about the topics and more importantly, to listen to raw and unfiltered voices from those who are impacted by racism. I shared that we don’t have enough spaces to have honest conversations about racism on our campuses. It was a powerful session, indeed. One of the comments shared by a new pro and a former student activist was the myth of resource constraint in response to the idea that we need to be patient in our anti-racism fight. as we can’t solve the problem in one day. As the attendee stated, “how is is that money somehow magically appears after a crisis and when the university’s ranking is going down and donors stop donating as the result of a crisis when students have been talking with the administration for a long time before the crisis.” 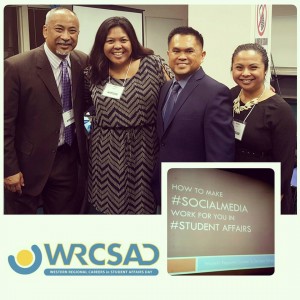 Social Media in Student Affairs session. I sat on a panel with  VP Henry Gee and Jennifer Rodil with Grace Bagunu as the moderator. We spoke about the role of social media at the personal, campus, and professional organization levels. As VP Gee shared, Grace was the first social media account manager for NASPA Region 6, and she was instrumental in getting VP Gee to use social media. Jennifer also credited Grace as her social media mentor. I personally met my co-presenters through social media first and have become friends since we met and so this session was a fun one to be a part of.

VP Gee spoke about why he joined Twitter at the urging of Grace and why he joined Facebook (to listen to feedback about his programs). He also provided important responses to questions from the audience on how to appropriately use social media as it relates to job searching and networking. Jennifer provided her insight on how she manages her department’s social media presence as well as strategies on promoting engagement with the NASPA Region 6 twitter account as well as the Instagram account. A question was asked by an audience member on how to effectively manage time spent on posting contents and managing social media accounts. Jennifer suggested having a schedule of postings and along with the schedule are the types of contents to post. I spoke about specific uses of social media at UCSB. I cited how I used facebook to share information about the status of our IT services during the power outage since our email server was out of service. Since we couldn’t send messages through our email server, facebook became the primary medium to communicate with our UCSB customers about the statuses of our services until we were able to have email service up and running again. The second example I provided was the significance of social media during a crisis. I specifically spoke about the tragic Isla Vista shooting on Mary 23rd, 2014. Social media became the medium for real-time communication (I learned about the shooting the minute shots were fired from students I advise through their facebook statuses), community building (show of support within the local UCSB community and across the globe on social media), and event coordination (series of events were held that following week along with a memorial at UCSB’s Harder Stadium attended by 20,000+).

I also spoke about the reasons why I blog including why I started (I was frustrated because I had a lot of ideas but I didn’t feel heard at my campus so my blog became a platform for me to express my ideas), what my purpose for blogging (promote student affairs technology and leadership), some strategies and tools I use, as well as how I address the common challenge of how to write authentically (I don’t share everything but what I do share are true to my heart).

Some audience members also shared their success stories including how they used social media on campus. One of the stories shared by the creator of the account was the use of twitter to inform students of food on the UCLA campus. The twitter account is called @hungry_bruin.

Several attendees spoke to the panel after the session for several minutes thanking us and to exchange other ideas.

Ethical and Legal Issues in Higher Education session. I was late to this session because of the last session but I am glad I attended as I learned some valuable insights from the panel which made me think about the value of understanding policies, making ethical decisions, and the increasing difficult choices to be made as one advances in the management hierarchy. The topics of institutional responsibility and ethics were discussed as it relates to things we probably don’t think about as ethical issues. As one of the panelists shared, staff don’t own the money used to run the university. Students are paying for the services and so when a staff comes into work late, they’re taking resources away from the students. A panelist shared his guiding principle when making tough decisions – “Did I follow the policy and did I practice fundamental fairness in the process?”

The three sessions I attended were informative and they led me to reflect on my role as a student affairs professional and how I view my role at my university as well as my career path. In addition to the value provided by the sessions, the most valuable experiences I got out of the conferences came during the breaks and lunch. These were the times when I had the chance to connect with our NUFP fellows and mentors but also to re-connect with friends I have not seen in a while as well as to meet new ones. Attending this conference with my fellow and our NUFP team was a wonderful experience we could build upon to further develop our relationships and to learn more about each other.

The conference was also an opportunity to connect with other Filipin@-Americans in student affairs. We started this tradition of taking a group photo at conferences starting last year and this photo below is a part of that tradition. It was nice finally meeting other Fil-Am professionals I met via social media face to face for the first time. 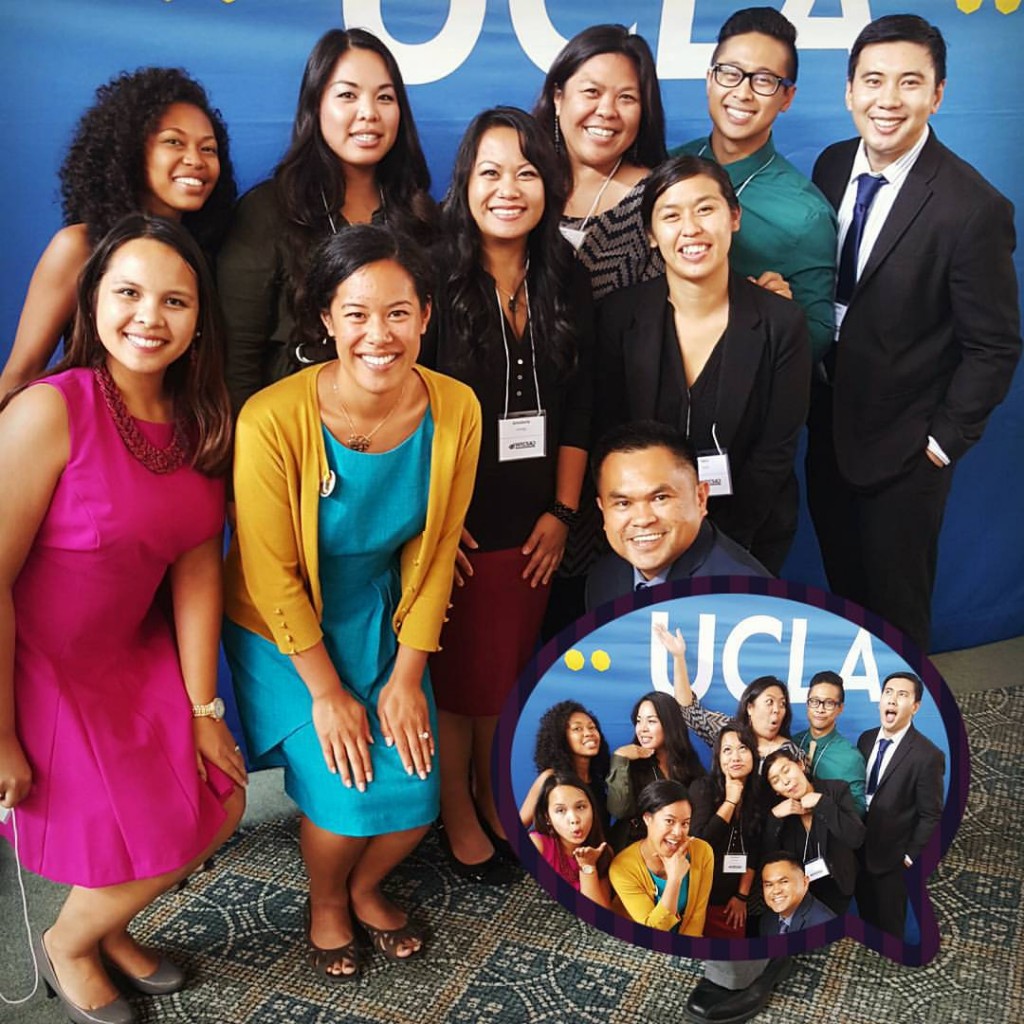