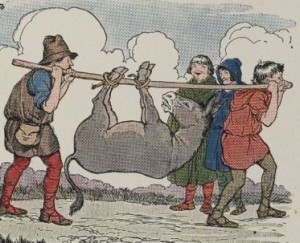 credit – The Aesop for Children

I came across an Aesop’s fable about “The Miller, the Son, and the Donkey” which illustrates the point that one cannot please everyone and one cannot satisfy all. This is a lesson I came to realize as I moved up the IT management chain and as my scope of responsibilities increased. I value a harmonious workplace. If I can avoid conflicts, I do whatever I can to avoid it or to resolve it early so it doesn’t escalate. Early in my career, I was very sensitive to criticisms and took them personally. I wanted to be liked by everyone, who doesn’t? What I’ve come to experience is that even with the best efforts and intentions, there were and still are those that will find my actions not to their liking. What I’ve also come to realize is that it’s all part of my job and I cannot take the criticisms personally. I’ve also accepted the idea that everyone I work with view me and my work from different perspectives. What one person sees as progress, another one will surely see the same action as something else. My work responsibilities involve having to weigh priorities, examining risks and benefits, and thinking about short vs long term goals. It involves having to accommodate the needs of our customers and what my department and my team can offer, given the lack of resources for the amount of work that needs to be done.

I’ve learned one definition of success/failure of my work is based on where the people looking at me are coming from and what they are focusing on.  I worked on a very critical project a few years ago that had a very aggressive deadline and it was driven by a federal mandate. In my effort to meet the deadline, I had to develop as quickly as I could to make sure our organization did not face any possible penalties.  In addition to my coding responsibility, I was also the project manager and performed requirements analysis, amongst other tasks. I remember working long hours, during weekends and holidays. When the project was completed, I was told several times that we came under budget, within the deadline and the users found it very usable.  Based on our customer and my supervisors’ feedback, it seemed as if the the project was considered a success. What I didn’t realize was that in trying to meet the goals of the project, my code was not considered satisfactory by some individuals and that became a focus of heavy criticism of my work for that project. I took those criticisms very hard and I began to think the project was a failure. For awhile, I doubted my abilities and internalized my emotions. It took me a few months of personal convincing with some help from those who know me to bring my confidence back. I also developed thicker skin.

Moving forward, I have come to realize that my motivations,  actions I take, decisions I make  in my current leadership position will be interpreted differently. Some folks will view them positively, some negatively while others will be indifferent.  In taking a stance, I will gain both praise and criticism. In the past, I would have rather not heard any criticisms. Now, even as uncomfortable they are at times, I need feedback, at least I could address them. There are values to having different perspectives. Nothing is as simple as black and white.

The only thing I can do is to follow the advice of my mentors – be kind and act with integrity,  stick to the high road, stay positive, and stay humble.