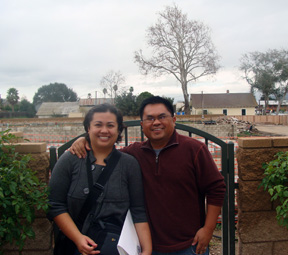 Taken during our visit of site of our future home.

This post is about how my wife and I were able to buy our first home  all because of my wife’s optimism. It’s about how she convinced me to just believe, share the dream with others, and act towards the dream no matter how improbable it might be. The dream might just become a reality.

By June this year, we would have lived in our new place for three years and it would never have happened if it wasn’t for my optimist wife. The year (2008) before we bought our home, she constantly told me, “we’ll get our home next year” and I gave her many reasons as to why that was impossible. These reasons include the “fact” that  we didn’t have the down payment, the prices were too expensive, and we couldn’t afford the increase in monthly payments. These conversations happened so many times I got frustrated. But, in back of my mind, I knew she’s told me ideas before which I thought were just impossible but they did happen. While we (or I should say I), didn’t have any concrete plan to buy a home anytime soon, we decided to save more money than ever before.

Santa Barbara, California is a very expensive place to live and it was even more so at the height of the real estate boom. As a university employee, in my mind there was no way my wife and I would even have the chance to buy a home here. In the natural, we would need to move to a different city or county to afford a place. I even applied and was offered a position at another university in northern California. I rejected the offer after realizing that my wife and I love where we live and work too much, so if we had to rent an apartment for few more years, we’ll stay here.

What happened in the first two weeks in January 2009 was a series of events I could not have imagined. At a meeting during the first week back at work, I casually mentioned to my colleagues about our intent to buy a home, even if we had to move. She mentioned about a new condo development 30 minutes from where we work. She recommended for us to visit. I didn’t really take her recommendation too seriously since in my mind, what was the point if we couldn’t afford it. I mentioned it to my wife and she encouraged us to go. We visited the site that Sunday just to “look around”. The sales person mentioned that all available units have been claimed but in three months, there will be a new set of buildings we could be considered for. He encouraged us to add our name to the list. The price of the condos were the lowest we have heard in Santa Barbara County and so we left feeling maybe there’s a possibility, yet never really took it seriously.

We received a call from the sales agent the Wednesday after our visit.  One of the units became available. The financing of one of the people on the list had fallen through. He asked us if we wanted to submit a refundable deposit to reserve our application. Luckily, we had saved enough money by then to afford the deposit. By the end of the week, we had been pre-qualified for a loan and we were on our way to owning our first home.

In retrospect, if my wife had not planted the seed in our minds about the possibility of owning a home, we would not have put some serious effort towards saving that allowed us to qualify for a loan. It also had not prompted me to talk about it with my colleagues that led us to visiting the site of our future home.

I would encourage you to pursue your dream, even when you think they’re unattainable with what and where you are now. It could just help you make it happen.