I recently became more interested in Yik Yak, the anonymous and location based social network  a couple of weeks ago when controversy arose from the use of it by some student affairs professionals attending the NASPA national conference in New Orleans. I read through the comments and there were different types of comments posted from what could be considered sexist, unprofessional, and provocative. There were also other comments that some would consider as fun and positive. Most of the discussions revolved around the first set of comments I described above. I also read the reactions of other student affairs folks on the matter and their perspectives varied from their interpretations of the comments as well as pointing out related topics (social justice, professionalism, etc) and even the motivations behind the comments.

Since two weeks ago I’ve begun to check YikYak more often just to observe what our students are posting. In addition, my team did an April Fool’s joke on the students by re-introducing a checkbox feature on our student information system’s login screen, a feature that was not too popular when we had it available two years ago. I wanted to see the students reactions on our joke. What I noticed were overwhelmingly positive. Students found them funny. One of the students even posted this – “Props to the people running GOLD for having a sense of humor. I wish I knew who you were to bring you cookies. :P” 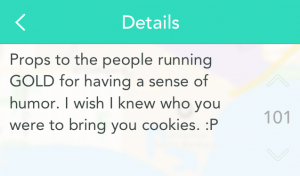 \There’s another major event in the town next to our campus (Isla Vista) called “Deltopia” happening this weekend. Google the term and you won’t see too many positive comments about the event. One of the major factors attributed to the problems at last year’s event was the tremendous number of out-of-towners that came to UCSB as the event became well-known throughout California and beyond through social media. A theme I’ve noticed the last few days is how UCSB students are very strong in their opinions about not having “oot” (out of towners) visiting Isla Vista this weekend. As one of the comments show “The fact that OOTs are so ignorant about what’s happened in our town and have no respect for it really upsets me. Blaming a lot of things on us when most of it is cause of them.” 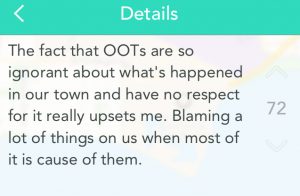 Other general comments I notice are related to expressions of wanting connections and loneliness (“I don’t have any friends and I don’t know how to meet people.”) and most, if not all, of the responses to these comments were offers of help. There are also comments related to their lack of personal confidence (body image), sex, and other topics that I would guess would not be shared if they’re not anonymous.

As I read through the comments, I find most of them to be of the positive tone though from time to time, I do read some crass comments. Another thought that comes to mind as well – Is my perception/interpretation of YikYak different from others, even if we are reading the same comments? Is how we perceive the comments on social media and the use of them based on our personal biases? Certainly, as I mentioned at the top of my post, there are different types of comments on YikYak, but do we focus on the comments that resonate with us?

As the saying goes – “beauty is in the eye of the beholder.” Is our interpretation of social media, the use of them, based on our perceptions shaped by our experience and value systems? I was reminded of a situation many years ago when I was still a student. I was the President of our student organization and so I was the coach for our basketball team at a tournament. I wanted to represent our organization well so I was in a suit and tie.  A few friends of mine complimented me but one of them called me a “poser”, a not-so-positive term. I don’t know why these friends of mine, who were looking at the same person (me), had different reactions.

Another analogy applicable to how we perceive social media is that there are some folks who will somehow see something negative in every situation. A story that I’ve read is something called “negative farmer” and it goes something like this:

Going back to YikYak and my observations, perhaps my view of YikYak is more positive than others because of the types of comments that resonate with me. I don’t know. What do you think?