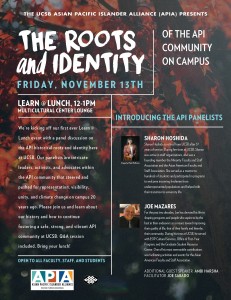 Student activism was the topic for this week’s #sachat session on Twitter. This is a weekly chat session for student affairs professionals and students interested in the profession. Coincidentally, the event I am facilitating called “The Roots and Identity of the API Community on Campus” to be held next week was also announced on Facebook today. The chat and the event reminded me of my student activism days at UCSB back in the 1990’s.

Another major effort undertaken by the students was the establishment of a physical space for Asian American students so we can have a place we can call home. After many years of working with the administration, the effort resulted in having a room identified as “Asian Resource Center” which led to a building now called Student Resource Building wherein several student service departments as well as resource centers for marginalized student populations are located.

One of the most memorable moments when I was a student was when I called my mom letting her know I was involved in a student protest. My mom was furious at me for being part of it. She was also scared of what would happen to me. She yelled at me that I will go to jail. Her reactions were because of what we had seen in the Philippines growing up. When we left the Philippines in 1984, it was about the time of People Power Revolution that deposed Ferdinand Marcos, the President of the Philippines back then. During that time,  we witnessed protests on the street in Baguio City where I grew up. My parents were never politically active so I never participated in the protests. My parents were also adamant about me not getting involved because of the fear of being arrested or other consequences.

Looking back, one of the benefits in getting involved with student activism was developing my identity as a Filipino-American. Coupled with Asian American courses, including a Filipino-American Experience course, my involvement within the Asian American community provided me opportunities to learn about Asian American history as well as the opportunity to develop my racial and cultural identities. By being aware of the struggles of Asian-Americans throughout our history, oppressive laws like anti-miscegenation and racial discrimination and segregation practices, and how Filipino-American leaders like Pablo Manlapit, Philip Vera Cruz, Larry Itliong led movements to fight injustices, it led me to exploring what it meant to be a Filipino-American. I became more keen to the portrayals of Asian-Americans in the popular media. I also became more sensitive to micro-aggressions I faced everyday. I noticed how I was followed when I entered stores. I noticed how my White hall mates insisted I only got accepted to UCSB because of affirmative action.

While I didn’t know it back then during my days as a student activist, I was going through an identity development process. As Kim’s Asian American Identity Development Theory suggests, I had gone through the following stages including ethnic awareness, White identification, awakening to social political consciousness, redirection, and incorporation.

After graduation, I found a job at UCSB and to this day, I’m still at UCSB. As a professional, I became a staff advisor to several organizations, including the Filipino-American student organization called Kapatirang Pilipino, Pilipino Graduation, and Pilipino Cultural Night (PCN). It’s been interesting to mentor and observe the student leaders and watch them go through the similar identity development process I went through. I hope that their experience as student activists will help them in finding themselves and in their careers as it had done for me.