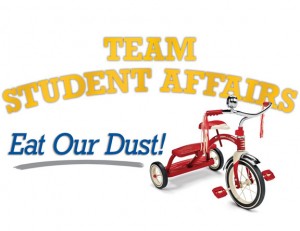 When I was asked earlier this week to participate in a tricycle race as part of a fundraising event at UCSB, I didn’t think about it too much and I just accepted the offer. I’ll be a member of the Student Affairs team led by our Vice Chancellor for Student Affairs Michael Young. Truth be told, I haven’t ridden a bike in 20 years, definitely not a tricycle.  I’m probably the least fit amongst those participating and I will probably embarrass myself in front of many campus colleagues.  I really don’t mind that part. I just hope I don’t lose the race for the team:)

I think if I had been asked few years ago, I probably would have refused as I would have been too self-conscious about how I would look in front of others. One lesson I’ve learned as my career progressed is not to take myself too seriously. We work in hierarchical organizations dictated by titles and as I got promoted, I made the mistake of thinking the higher in the organization, the more serious, the more formal I had to be. I felt like I had to be perfect.  I used to take criticisms for my “shortcomings” very hard. It became too hard for me to be serious all the time, that just isn’t me.I had to go back to who I think I am, someone who just wants to go through life enjoying it, one who makes mistakes occasionally.

Sometimes, we just have to let loose. There’s a certain sense of freedom that comes in being able to make light of our ourselves. Will my colleagues think any less of me when they see me trying my darn best (comically) to pedal this little tricycle? I doubt it.